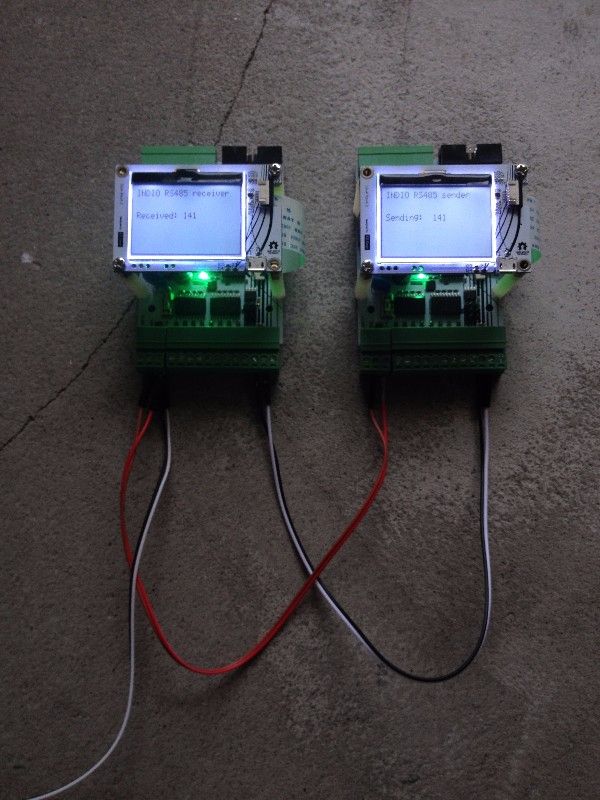 The Industruino INDIO has a half-duplex isolated RS485 transceiver, connected to the 'Serial' hardware serial ('Serial1' on the older 32u4 and 1286 boards). RS485 is a popular industrial standard for serial communications. It is often used with the Modbus protocol, as Modbus RTU. Using available libraries, this is relatively easy way to exchange data between Master/Slave(s) units, e.g. several INDIOs, or other sensors that support Modbus RTU.

In case you are just interested in serial communication, the RS485 port enables you to communicate over distances up to 1-2 km.

Note that RS485 is half-duplex, so we cannot send and receive at the same time. We need to use a TxEnablePin to switch between sending and receiving. This pin is connected to D9 on our MCU.

When available please connect the shield ground of the RS485 cable to the GND connection of the RS485 port to avoid common-mode voltages that could potentially damage equipments.

In the picture on the left, the 2 INDIOs are powered from the same PSU so the GND connection is not neccesary.

The 2 sketches below are for a Sender that sends a single byte (increased by one, every second), and a Receiver that reads the byte and puts it on the LCD.